a thought regarding gender

The other day, a stranger was greeting my dog.

In that moment, I felt rather strange.  This person was so concerned about correctly gendering and addressing a creature that (a) has no real gender expression, culturally speaking, and (b) doesn't really understand language anyway.  My dog wouldn't care if you called him a girl.  He wouldn't care if you called him a monkey, or a pineapple.  He doesn't know words.  Honestly, if he didn't actually identify as a boy dog I wouldn't know, because he can't tell me.  And I could have said anything; it's not like she demanded to inspect his genitals to make sure I wasn't "lying" to her.  She just moved on with appreciating a cute animal.

But the fact that the situation caused her enough concern that she needed to check in with me in order to not accidentally mis-gender was interesting.  Here was a culturally sanctioned interchange, designed to efficiently clear up an issue of gendered address. It was a pretty cool dynamic, really, just applied to a not terribly culturally significant situation.  It was simple, brief, and effective.

And then people freak out when they can't immediately gender another person, or when someone asks to be gendered in the way that is correct for them, which might conflict with others' perceptions or assumptions.  Somehow the mandate to simply check in on the situation, request information, and then respect that information, totally evaporates with humans.

It would be nice if we afforded our fellow humans the same respect for gender that that lady showed to my dog.
No comments:

For this friday's bento feature, I made good use of my heart-shaped silicone muffin cups.  Those things are dang useful for containing all sorts of stuff.  However, they're only one size, so the teriyaki sausage and bell pepper stir fry is split between two of them.  Oh well.

And yes, that's an onigiri.  I'm pseudo-paleo, and rice is tasty sometimes.  Whatevs.

Underneath: miso-ginger zucchini and broccoli. 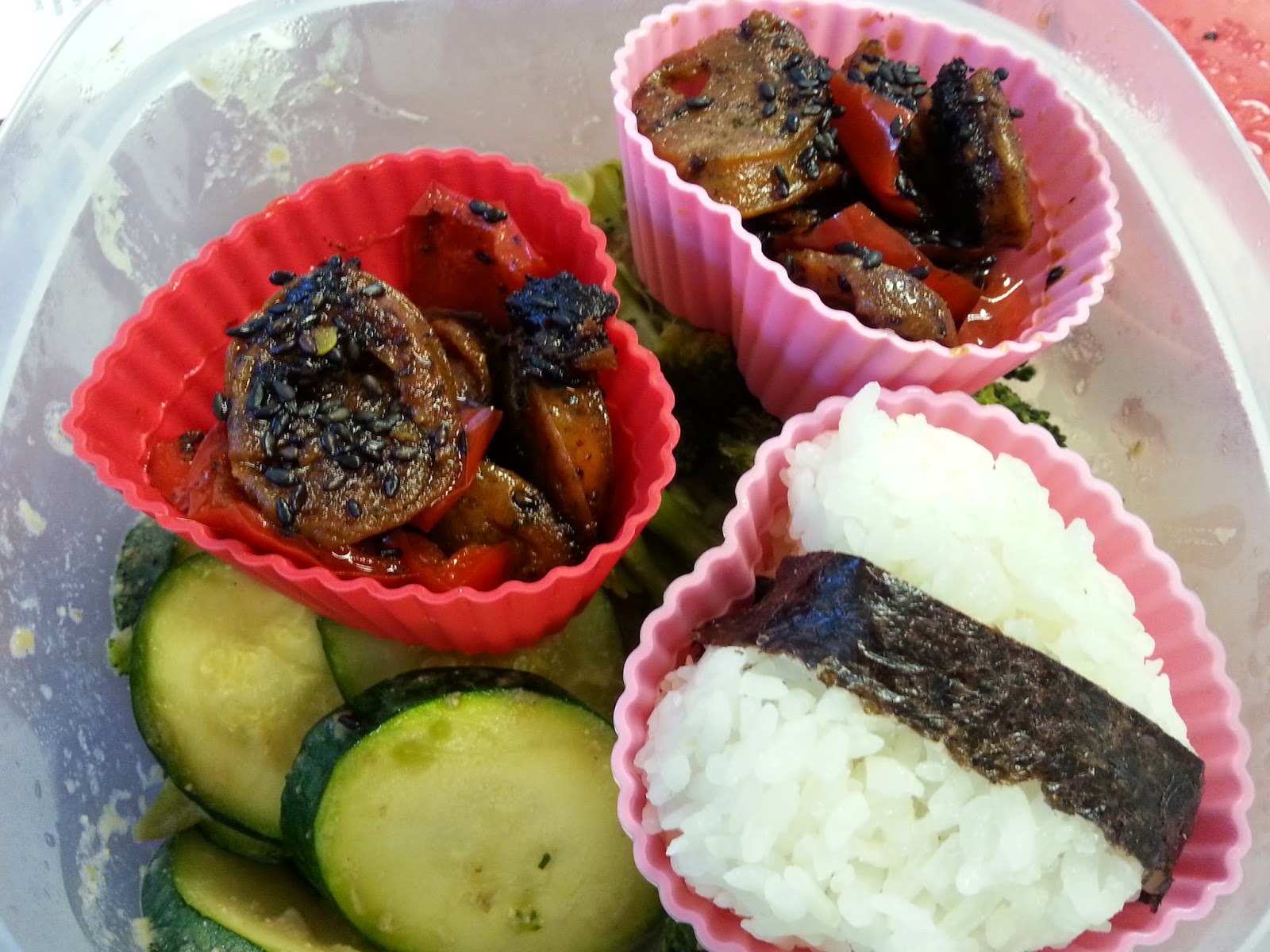 Have I told you the magic thing about fresh ginger?  I adore fresh ginger, but was always buying a piece, stashing it in the fridge, and using maybe a third of it before it got either all moldy or desiccated.  Sadface.

Then I learned a thing!  Here's the secret: you can grate frozen ginger.

Now I keep my ginger in a baggie in the freezer, and just pull it out and grate it directly into whatever I'm making.  No need to remember to defrost, no more food waste, and no more "I totally have ginger, no prob... oh, it's a ball of mold.  Oops."

Going back through the archives, it looks like I used to post bento things on Fridays.  Maybe I should start doing that again. Oh hey, it's Friday!  I should write a thing.

Look at me being all grown-up and stuff.

First off, I've talked about these zucchini noodles (adorably called 'zoodles').  They're... well, they're not noodles.  Because they, well, have the texture of zucchini.  But they are long and skinny and fun to slurp, so they largely serve the same purpose.  Good enough for me.


Also, can we take a moment to appreciate the gloriousness that is a big pile of fresh shiitake mushrooms?  There's a sort of international market that sells these at a tiny fraction of the price you get from fancy grocery stores.  They are amazing.  They are my world.  Mmm.


Anyway, assembled into bento form, we have this lovely creation below. 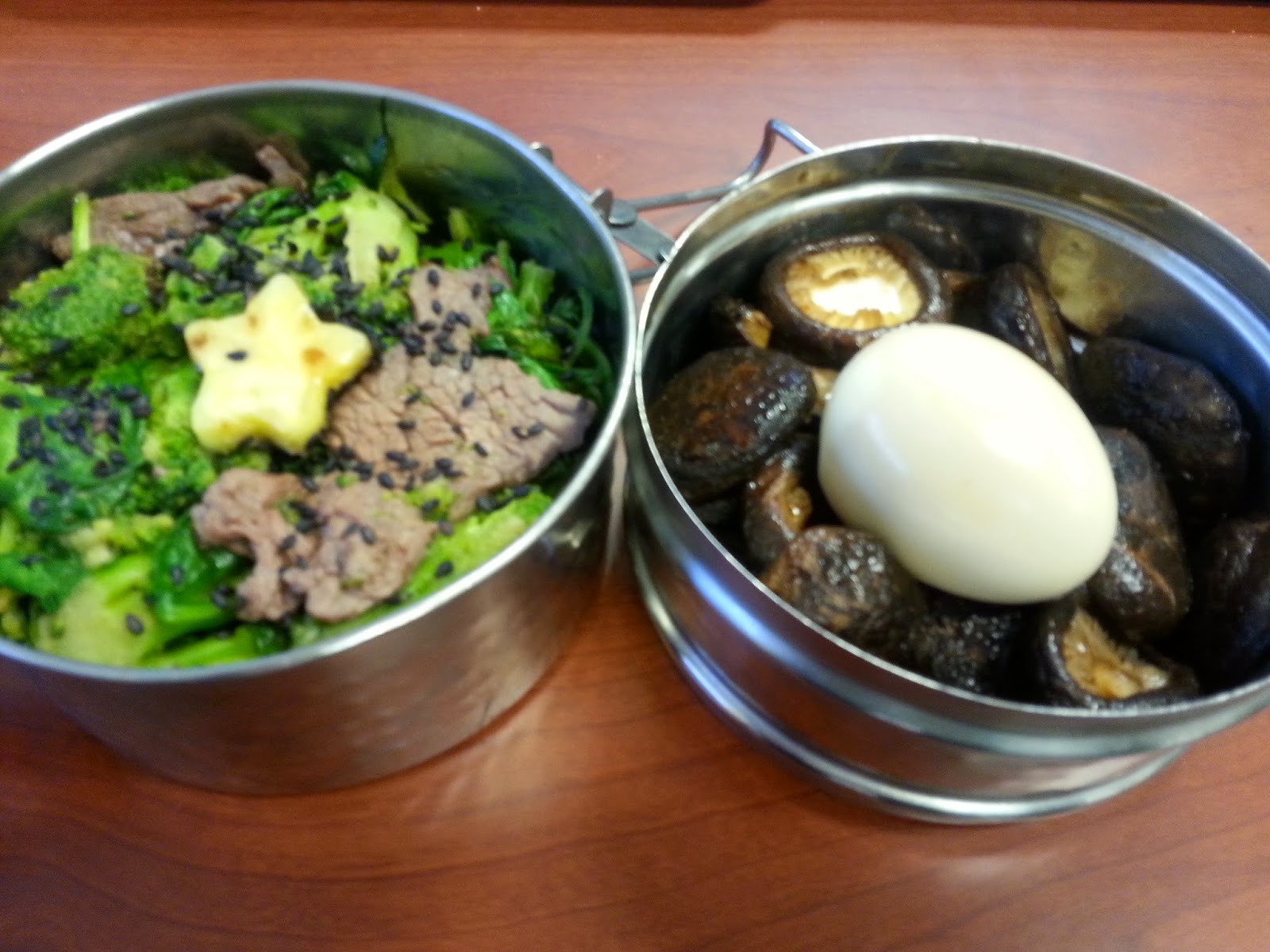 awesome thing of the day: cupcakes for equality So you've heard about the hubbub in Indiana, right?  The whole "Religious Freedom" legislation exempting businesses from serving customers if they don't "agree" with their personal lives?  It's harmful nonsense, pandering to those who feel a misplaced need to not only control other people, but to assert their rights to bigotry and overt hatred under the guise of religious freedom.

There's one now-famous bit about a pizza parlor refusing to cater a hypothetical gay wedding.  Thankfully, there are some Christians out there who are sick and tired of their religious being defined by hatred.  And one in particular is taking direct demonstrative action:

"To prove that not every Christian business owner is obsessed with their clients’ sex lives, a New York Christian pastor says he and his church plan to hand out cupcakes near several gay-friendly bars in New York with the help of local bakers.

another bento, because I don't know what else to say yet


So my life has been super weird for a while.  Transitioning back into desk-job-land can be a little disorienting after a prolonged period wherein my existence was mostly made up of binge-watching Babylon 5 and eating Nutella with a spoon while naked.

Anyway, I floundered around a little bit.  I'm now re-embracing my white-collar reality, and part of that means realizing just how dang expensive my coworkers' habit of going out to eat every single day for lunch gets to be.  On top of that, the whole dietary limitation thing means there's... maybe one or two things I can order at a given restaurant, and friends, that gets boring.

So.  Prepping real lunches suddenly makes a whole hell of a lot of sense.  Last week I made a frightfully general pronouncement of the "I'm gonna do this now!" variety, but hadn't really, like, planned or anything.  So last week was a little haphazard.  But being the obsessive planner that I am, this week, by golly, there's strategy.  With shopping in advance and everything.  See me adulting all over the place?

So this morning I got up with the alarm instead of dawdling in a warm bed, and made this delicious creation.  It took about 20 minutes and took up only two pans and one spatula, making it totally manageable.  This one also neatly illustrates two of the most often used tools in my bento cooking toolbox.

Simple Veg Stir Fry
The idea is simple: cut up whatever veg you have languishing in the fridge, saute it a bit, and top with whatever sauce sounds tasty.

In this case, that looked like:
But the basic model is remarkably versatile.  Instant side dish, foundation on which to layer something fancier, or bento filler.  Add something proteiny and you could  make a meal out of just stir-fried stuff, though for bento I like making multiple little dishes.  While my bento are super-boring by some standards and I'm neither cool enough nor motivated enough to get into kyaraben, I do feel that having several dishes in the box makes it somehow fancier and less like leftovers.

Teriyaki <insert meat here>
So at the store, I was poking around and found a ridiculously gorgeous looking steak.  I didn't recognize the type of cut, but it was deep red and beautiful, so I took a chance and bought it.  I kinda know nothing about meat; it's a bit of a skills gap.  Must fix that someday.

Last night it was sliced up super-thin (across the grain, of course!) and tossed in a baggie with some soy sauce, mirin, and brown sugar to marinate.  Normally I'd use some sake as well, but we appear to be out at the moment so whatever.  This morning I fried it in some sesame oil for like two minutes (cast iron over high heat gives the most satisfying browning without overcooking), added a little extra of the sauce ingredients, and topped with sesame seeds.  Super easy!

This model (slice meat, marinate overnight, fry up) is a good one, and seriously takes maybe five minutes in the morning.  Chicken and steak are great for this.  Delicious and so trivial to do.

The combination of these two generic "recipes" facilitates a lot of not having to think in the morning, but still winding up with a tasty lunch.  And I appreciate that rather a  lot.
No comments:

a return, a complicated, and a bento

It's been a while.

A lot of life has happened.  A LOT.  And we'll get to that.  For now let's say that my life was turned upside down for a while, but that I've gotten back on track and it's all starting to make sense.  Honestly, it's pretty awesome now.

Frankly, I've been a little intimidated with the idea of coming back to blogging, because of the sheer enormity of what's happened, and how intense it would be to try to explain everything satisfactorily.  But you know what?  Maybe it's better to write a thing, rather than waiting to write the perfect, all-encompassing thing.

So instead of delving into my personal drama... have a bento!  That's right -- after a long hiatus for the above-mentioned chaos, bento is once again a thing in my life!  It's a little more complicated now, because:
So the intersection in the Venn diagram of the above situations is... rather limited. 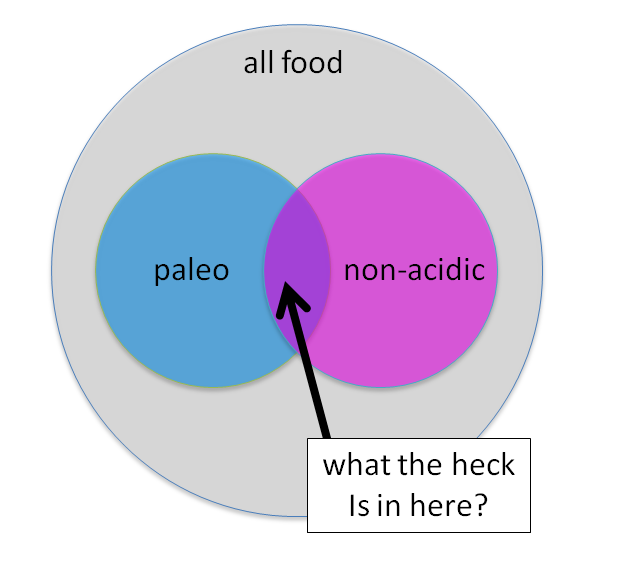 But by golly, I'm gonna figure it out. Assisted rather significantly by this epic collection of paleo lunches. 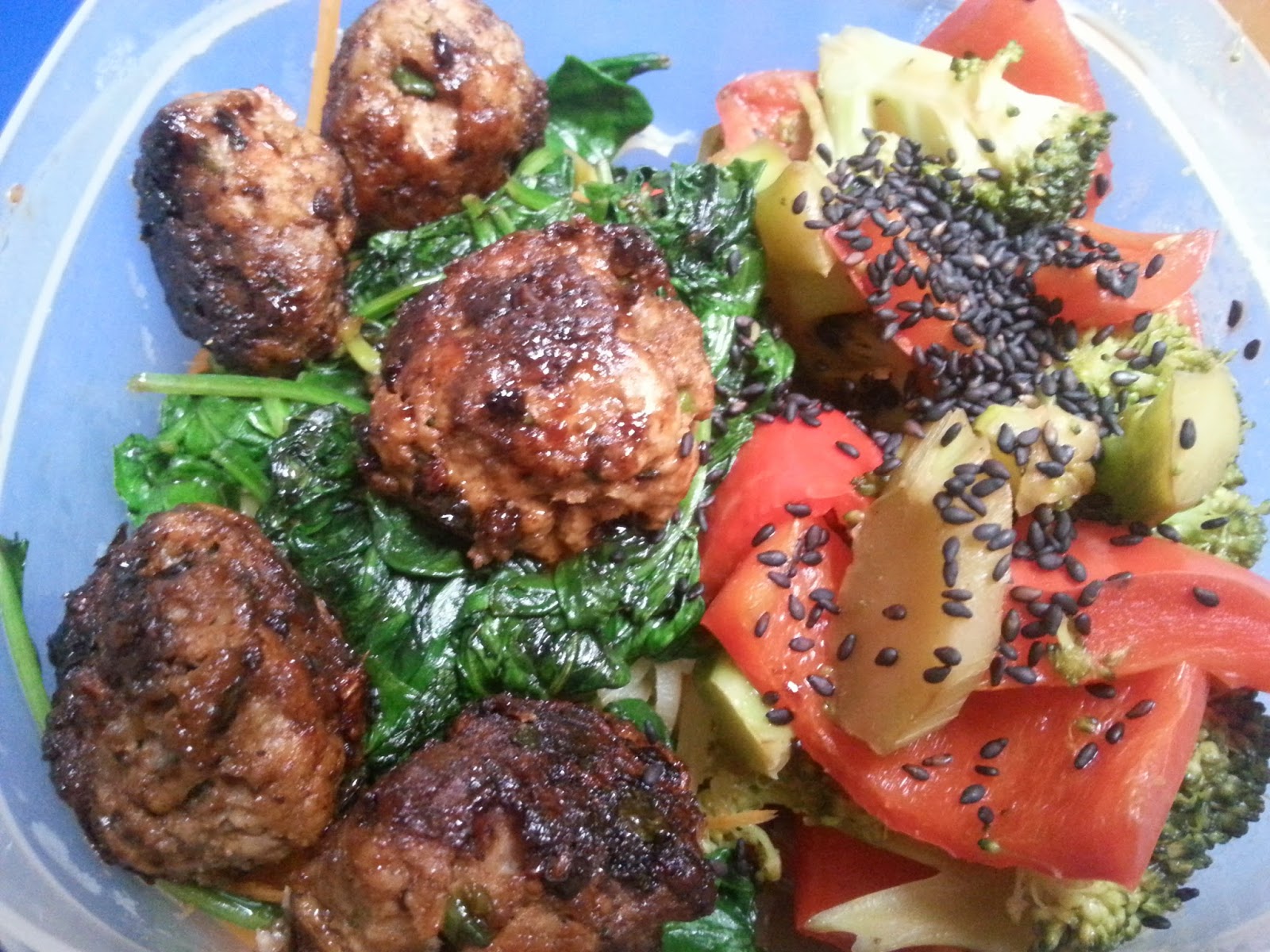 A few days ago, I made a big batch of ginger-teriyaki meatballs based very loosely on these ones.  I used carrots instead of sweet potato, dumped in a crapload (that's a technical measurement, there) of fresh chopped ginger, and some random teriyaki sauce that was in the fridge.  I omitted the cilantro because I hate that stuff, the tomato paste because I can't have that anymore, and... okay, so I didn't follow the recipe at all.  But it gave me the idea, damn it!

Anyway, I made a batch of those and froze 'em, because dudes, I am lazy in the mornings.  This morning I had a plan to make cracklin' chicken, because it sounds awesome, but then morning happened and somehow dealing with raw meat just didn't seem like a thing to do.  So voila!  Magical pre-made freezer meatballs to the rescue. I'm a genius.

We have:
So... it's a bento!  And it's paleo, and it's my-weird-diet-restrictions-friendly, and it'll probably be reasonably tasty.  Win.
No comments: 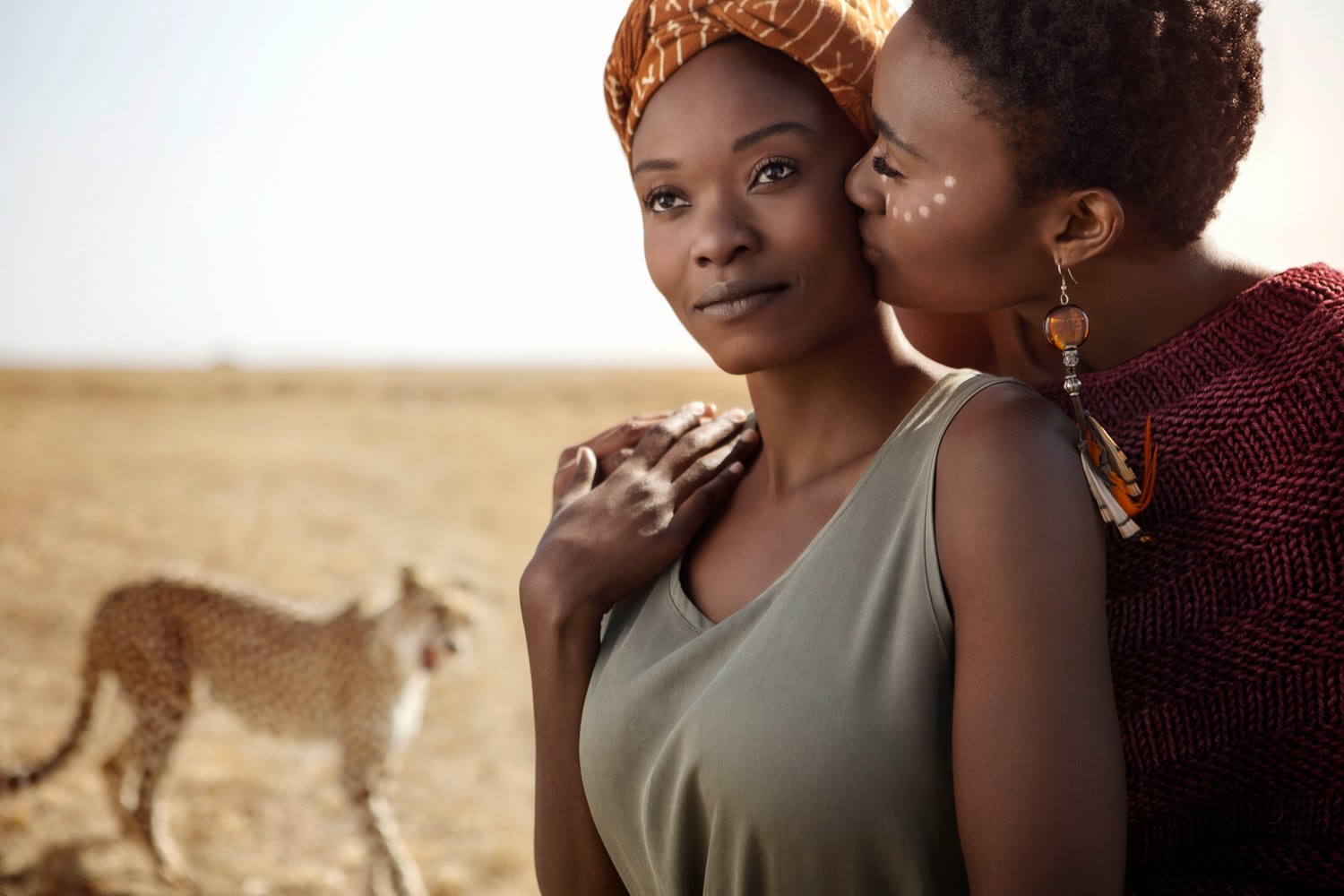 When we think of the epitome of romantic love, when we summon up an image of what it means to be in love, who are the participants?

One photographer, Braden Summers, though gay himself, realized that even he automatically conjured heteronormative images of same-sex couples.  He realized how much this deeply exclusive image fails to represent the fullness of humanity and of love, so he set about (via Kickstarter) to travel around the world combatting this representation issue with his camera.  And the results are breathtakingly gorgeous. 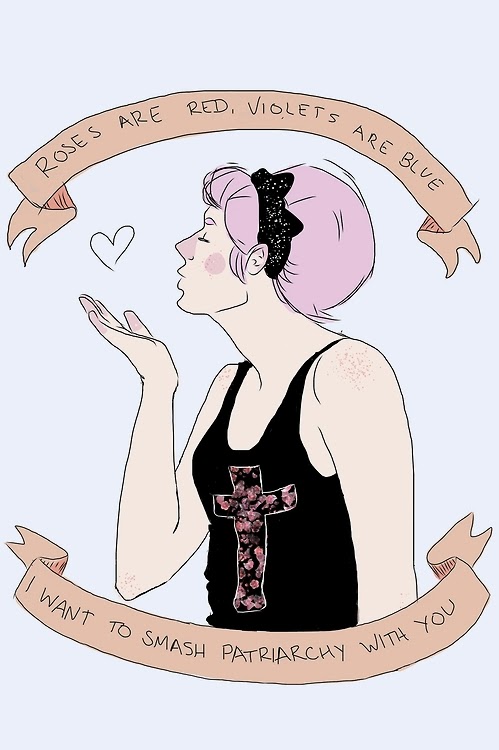 awesome thing of the day: rupert grint and an ice cream truck 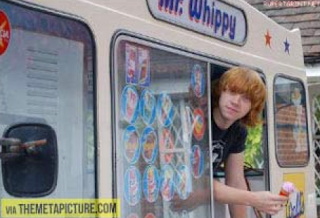 So Rupert Grint, of Ron Weasley fame, is apparently an amazingly cool human being.

What did he do with his (probably massive) wealth from rocketing to stardom via the Harry Potter franchise?

He bought an ice cream truck.

He drives it around, looking for kids, and then gives them ice cream.  For free.  Cuz the kids looked like they were 'in need of ice creams.'

This dude is seriously awesome.
No comments:

awesome thing of the day: kickass a capella of epicness

Welp.  This performance of FSU's AcaBelles a capella troupe performing Lorde's "Royals" is pretty much the best thing ever.

I couldn't get the video to embed properly for some reason, so follow the link and go watch it.  Now.
No comments: